There was a really interesting article on autonomous vehicle. The article was presented in opinion page of The New york Times.

The driverless car, like other utopian pursuits, seems always to be just out of reach. It’s captured the imagination of many for at least a century: in 1918, the Oakland Tribune reported (in a section I wish all newspapers would bring back called “New and Interesting Facts from Science and Life”) that “the new car will be all glass-enclosed and controlled entirely by a set of push buttons. It will have no clutch, gears or transmission, will sit low, have small clearance and punctureless tires.” 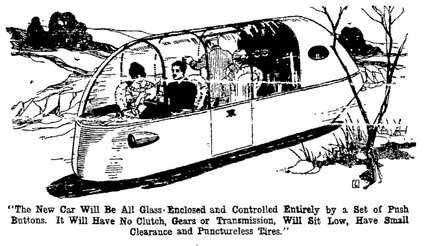 The Oakland Tribune “The new car will be all glass — enclosed and controlled entirely by a set of push buttons. It will have no clutch, gears or transmission. Will sit low, have small clearance and punctureless tires.”

It’s striking that 1918’s Motor Car of the Future doesn’t look — or operate — all that different in concept from the 2013 one (or, for that matter, from the 1957 one, which was projected to run on electricity). Our collective visions of the future seem almost always to draw from a limited visual tool kit. 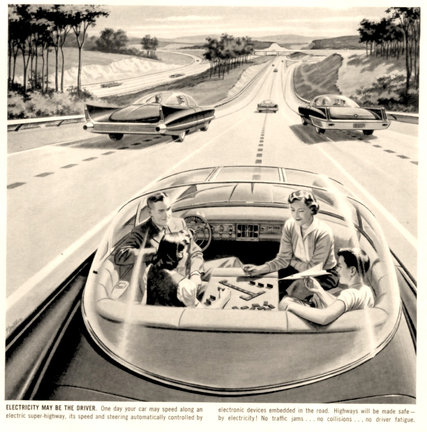 Advertising Archive/Everett Collection. “ELECTRICITY MAY BE THE DRIVER. One day your car may speed along an electric super-highway, its speed and steering automatically controlled by electronic devices embedded in the road. Highways will be made safe — by electricity! No traffic jam.. no collisions… no driver fatigue.”

The driverless car doesn’t look any more futuristic today (in fact, it pretty much looks like … a car), but what is radically different now is that the means to make that car drive autonomously have been figured out. For example, Google’s driverless cars — the ones you hear the most about — have completed over 300,000 autonomous-driving miles accident-free. Many experts, from architects to automobile executives, predict the ascendancy of the autonomous vehicle within three generations. Allstate is preparing actuarial tables; Ford, BMW, Audi, Mercedes-Benz and Nissan, among other car manufacturers, in an unusual shift toward long-term planning, are seeing the writing on the wall and have developed working prototypes. (This may be a smart strategy, given how the United States is trending; in China, meanwhile, car ownership is growing by more than 10 percent annually.)

Much to the delight of the futurist/Singularity-ist Ray Kurzweil, we’ve come to a point when driverless cars are not so much of a technology and engineering challenge anymore. “We’re now arguing over the date of when this will happen,” says Gerald Tierney, a senior associate at the architecture firm Perkins + Will who helped organize the 2010 RedCar Colloquium to explore and advance the evolution of “personalized ubiquitous and autonomous transportation.” He predicts a time in the not-so-distant future when this new wave of transportation will be so ingrained we won’t even think about it. “It becomes so ubiquitous. It will be like when we turn on an electric light. We don’t think about the mechanics of doing so.”

But all the geeky enthusiasm overlooks serious, um, roadblocks with regard to urban design and social equity. And, if you’ll forgive the hyperbole, the American dream — which is, after all, deeply grounded in the car, the social signifier that is the three-car garage and, even, the red Corvette that is the midlife crisis. There are some very good things autonomous vehicles might possibly provide — yet the obstacles to their integration seem insurmountable. If we’ve struggled so much to get a few hybrid cars on the road, how could we ever begin to get even near replacing our existing auto-dependent system?

But back to the possible upsides. First, a potentially safer way to get around. Cars are dangerous — over 32,000 people were killed by motor vehicles in 2011 alone — mostly because of the people who drive them. Remove the driver, say autonomous advocates, and you’ll remove the danger. Further, self-driving vehicles provide mobility for those who lack it — the disabled, seniors, even children — and for those who perhaps shouldn’t have access to it otherwise (i.e., drunken drivers).

Second, freeways are crowded and don’t work particularly well. No matter the intervention by experts (more lanes, wider lanes, car pool lanes), gridlock ultimately asserts itself. Autonomous vehicles increase the efficiency of freeways by anywhere from 100 to 300 percent, mostly by having them behave more like a networked rail system. “Freeways will be given over to cars that drive themselves,” says Tierney. Further, with the rise of the use of social apps, more rides will be shared. So, theoretically, less road space will be able to carry more people, allowing land to be reclaimed for public use (bike lanes, parks, rain gardens and the like). 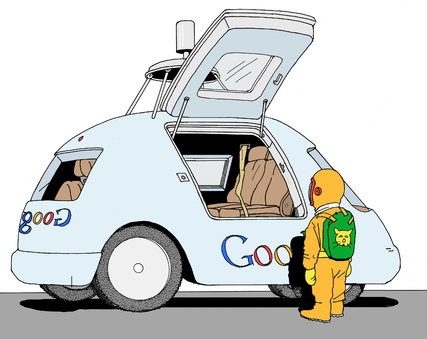 Steven M. Johnson The self-driving car is here. But would you feel comfortable putting your child in one?

What About the Bus?

All of the above assumes a lot. First and foremost, an embrace of the driverless car takes as a given that cars are the future. Instead of exploring more effective transit solutions that could carry more people from one destination to the next, the driverless car, by definition, keeps the car as the No. 1 choice for getting from A to B. Imagine if Google (which runs more than 100 shuttle buses throughout the Bay Area each day to get its own employees to work) had put comparative brainpower around accessible public transit instead of to individuals driving alone — or rather being driven, while alone — in cars.

But Why Are We Still Focusing On the Car?

Self-driving cars seemed futurist a century ago; today, it seems out of touch to focus on cars at all. Americans are buying fewer cars, driving less and getting fewer licenses as each year goes by. Rates of car ownership are decreasing. Bikeshare, rideshare and carshare programs are gaining in popularity and acceptance, as are transit-oriented communities.

So why continue to design and plan for a car-based society? Transit innovation is possible, and is indeed inspirational, in many non-North-American cities. The TransMilenio bus rapid transit system in Bogotá, Colombia, for example, comes to each bus stop every 10 seconds and carries close to 40,000 passengers per hour, 1.6 million per day. (Every 10 seconds — can you imagine?) In the United States, it feels like all that innovation is connected to the automobile with app-enabled carsharing, ridesharing and even the renting out of one’s driveway for extra revenue. While this sort of invention is a welcome addition and helps reduce the problem of one person driving alone in one car, it has the potential to lessen our belief in public transit as a public good as greater numbers of people turn to these customized solutions for getting to work.

I began writing this article during the Bay Area’s BART strike the week of July 1, and it was disconcerting to hear many folks in the Bay Area shrug their shoulders (or stick their feet in their mouth) about the loss in service. For them, it was a minor inconvenience, remedied with a $15 ride from the Uber car service (“everyone’s private driver”) or from the on-demand carsharing service Lyft in lieu of a train trip. (Forbes magazine, among others, has argued that the greatest obstacle to driverless cars may well be taxi drivers.)

I wish more start-ups would devote similar zeal to non-car-focused pursuits. And that these innovations were not app-dependent, and by extension, accessible to those without smartphones.

(And it must be said, inherent in an embrace of driverless cars is an assumption of benevolence. The utopian notion that these vehicles would eliminate danger from the driving equation is naïve at best — it’s not difficult to imagine how easily the freeway’s computer networks could be hacked.) 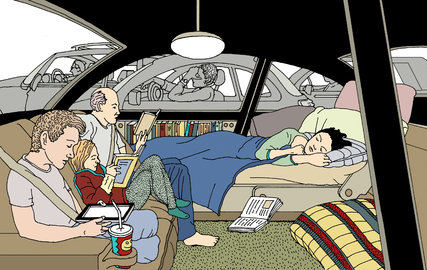 Tech-optimists see driverless cars as a boon to urban densification, but cars — with or without drivers — aren’t what make a city vital or interesting. Self-driving cars aren’t necessarily effective in getting cars faster on surface streets, they make traffic flow better on freeways.  No one is going to support inefficient freeways but endeavoring to make  car travel so effortless feels like a gracious invitation to endless suburban sprawl. If you can read your iPad, enjoy a cocktail or play a video game while commuting, time spent in the car becomes leisure time, something desirable.  Long commutes are no longer a disincentive.

America’s car-dependent culture has been encouraged (and subsidized) for the last half-century; instead of bucking that trend, a driverless car culture remains car-dependent.

Driverless cars can ultimately erase the need for car ownership — if not the need for cars. So how would that work? The most prevalent model being discussed right now is the subscription model. Instead of buying a single car you’d sign up for a full range of a car manufacturer’s offering. If you were planning on taking the family to the mountains for the weekend, an S.U.V. would pull up to your door on command. Just need to grab a few groceries? A SmartCar could swing by at your convenience. This flexibility is enabled by smartphones, of course, but what you gain in convenience you may sacrifice in privacy.

An added benefit of the subscription model? You never need to worry about parking again — but has anyone figured out how we’re going to retrofit all those parking lots? There would still be a need for parking of course (cars would typically be parked in central locations like rental cars at airports), though less of it given the declining rates of car ownership predicted to come with autonomous vehicles.

What About Social Equity?

Public transit is a public good. Autonomous vehicles — not so much. If you could afford a BMW before, you’ll be able to afford a subscription to BMW’s suite of offerings in this scenario. You can select a car to fit your task and even your mood. But if you couldn’t afford a car before, you probably won’t be able to afford a self-driving one either. The issue of equity — particularly for those who are most often passengers today — is glaringly absent from discussions of driverless cars.

How Would the Transition Happen, Anyway?

Exactly. The greater efficiency and safety presumed to come with driverless cars assumes the absence on the road of cars with drivers. If human behavior is the wild card, how do you keep those pesky humans out of the way?

How that might be achieved has yet to be determined. Think about hybrid and electric cars right now: when I attended a conference on Smart Cities last fall, I saw eight different electric car-charging stations. Eight. That variety assures “range anxiety” (the fear that a vehicle has insufficient range to reach its destination) and helps keep electric cars from gaining a real foothold in the marketplace. Imagine eight different gas pumps — that would have meant the downfall of the gas-powered car. Today, the lack of standardization in new options keeps us mired in old ones.

In 1973, in “The Ideology of the Motor Car,” the French (of course) philosopher André Gorz wrote that “The more widespread fast vehicles are within a society, the more time — beyond a certain point — people will spend and lose on travel. It’s a mathematical fact.”

Why? “Ultimately people can’t get around conveniently because they are far away from everything.” And it is this observation that for me epitomizes the problem of the driverless car — it’s the worst kind of solutionism. By becoming so enamored with how technology might transform the car, we’ve neglected to adequately explore how getting rid of cars might transform how and where we live. We’d do well to heed Gorz’s exhortation to “never make transportation an issue by itself.”