Honda’s Walking Assist with Stride Management: Coming to a Hospital Near You! If, that is, you’re connected to one of 50 Japanese medical institutions now testing and evaluating a pair of the semi-robotic exoskeletal assistive devices. Honda breaks down the what’s-it-do-and-how as follows:

“The [Walking Assist Device’s] control computer activates motors based on information obtained from hip angle sensors while walking to improve the symmetry of the timing of each leg lifting from the ground and extending forward, and to promote a longer stride for an easier walk.”

Honda’s worked closely with several medical institutions throughout development of the Walking Assist Device, but last week’s announcement of the 100-unit roll-out signals what is effectively their flagship field testing effort; a medical trial to collect feedback and evaluations from professionals and patients, and data from the devices themselves, of course. But it’s much sexier than your average medical trial. Because robots. Obviously.

Each rehabilitation and/or physical therapy-focused recipient medical facility gets one medium- and one large-sized device. Details on the cost and duration of the leases haven’t been disclosed, but we do have the following specs:

If successful, the devices will very likely see wider domestic trials, possibly moving beyond rehabilitation and making their way into the homes of Japan’s rapidly aging population. In addition to recovery, the Walking Assist Device could provide just the boost needed for walking to the grocery store, visiting a friend or family member, a healthy stroll around the shopping center, or, for Japan’s endangered farming population, 50% of whom are within 5-10 years of retirement, another trip out to the field.

Given sufficient demand, and should they be cheap enough to produce, the Walking Assist Devices could perhaps be enlarged for populations a bit more… uhhh, let’s be nice and say “a bit more robust.” Among other developed nations, the U.S. also has a growing population of retirees who’d definitely appreciate the extra spring in their step. But Honda, remember, you’re going to need some bigger springs. Sorry about that. It’s a problem. Sorry.

Honda’s Ongoing Assistive Robotics Commitment – Respect Due: While Honda began specific work on walking-assist devices in 1999, the devices weren’t widely public until 2009. Differences between the current and early iterations are visible in the main image above: on the right and left are the earlier, bulkier, more metallic devices – the middle image, included in last week’s press release, shows the sleeker, current model (the middle image has actually been out in the wild for at least a year, so one assumes the 50 medium and 50 large devices now shipping are the same, possibly with some under-the-hood upgrades and/or modifications).

Unless you’re of a certain level of robo-dorkiness, you might not know that Honda’s actually been pounding away on bipedal humanoid robotics tech since the mid-1980s. You might be unaware of their proactive efforts toward addressing Japan’s aging population crisis through assistive robotics (Akihabara News coverage). And, you could have missed news that Honda’s pursuing a robotics-in-the-home partnership with Sekisui House (even more Akihabara News coverage!).* 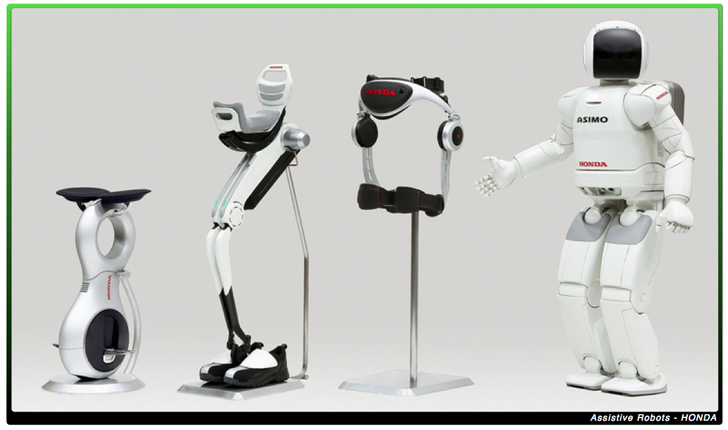